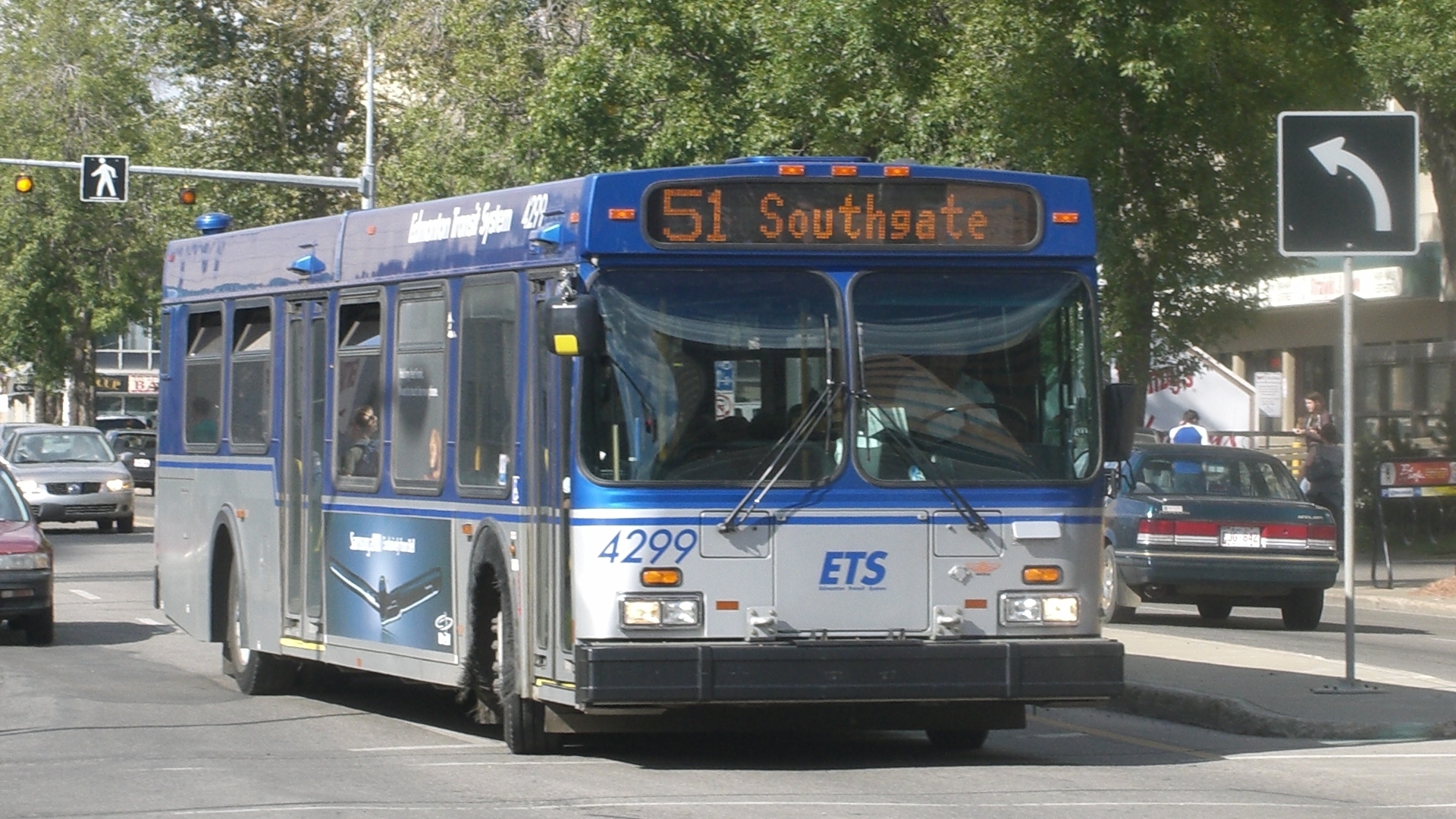 The Canadian transit landscape is a patchwork quilt of public and privately run systems that often don’t communicate, but things are looking up. A prime example of accessible systems that didn’t used to mesh is my hometown, Edmonton Alberta. For about 20 years, I lived in a suburb of Edmonton called St. Albert, a city of about 65,000 people. The St. Albert transit system uses an app called “Next Bus” that uses a user’s GPS location to update them in real time when the next buses will be coming to the nearest stops. The main screen that shows this info is straightforward and accessible with the stops labelled by number and route, and the next two buses that will be stopping there are displayed., Users can also explore routes by accessing the menu button at the top of the screen and drilling down a series of menus to find a city, zone, stop, and route. The discovery portion of the app does not use GPS, so finding routes is more onerous than it could be, but still accessible.

Edmonton is the capital city of Alberta, with a population of nearly 1 million, uses a web-based route planning platform called “trip planner”. With trip planner, users can select points of origin and destination by typing in a street address or intersection, or by selecting a landmark in a combo box by typing in the first few letters, or by typing in a bus stop number, conveniently found in huge print on every bus stop. Users then select the date and time they would like to arrive at their destination or leave from their origin. The system will then generate several possible transit routes the user may take. These are shown on a map and described in words, so thankfully all the options are quite accessible. There is no facility for real-time tracking, and there is no app. It’s all done through the Edmonton transit system (ETS) website. In short, the St. Alberta bus system tells you where the buses are but not where they’re going, and the Edmonton transit trip planner tells you where the buses are going but not where they are.

As of 2016, The Edmonton Transit system has completed updating their entire bus fleet to smart buses. Accordingly, trip planner and My Bus are being phased out, and passengers from both systems are being recommended to start using the “Transit” smartphone application.

Since both systems have been converted and made available on the new transit app, accessibility has skyrocketed! Now, both systems are fully explorable through the app. Users can search for bus routes by number, specific bus stops, or plot a bus route by entering the origin and destination addresses, intersections, bus stop numbers, or landmark names. The only hiccup in terms of accessibility is when plotting a bus route: the app shows a list of the relevant bus numbers, and (after double-tapping on the suggested route) it shows the relevant bus stops as well as how many stops they need to ride for or how far they need to walk. Unfortunately, the subway and bus numbers are not written directly beside the transfer points and directions, so a user must remember the order of buses they need to use from before they double tapped, and then pair that mentally with the list of directions. Thankfully, most routes in Edmonton require zero to two transfers, so it shouldn’t be too difficult to keep track of.

Otherwise, the app is lovely. The layout is clear and intuitive, and all of the controls and search fields are well labeled. Users can also receive notifications about when to leave their current location to get to the first bus stop in time, or timely directions along the route, so as to be sure to follow the planned route correctly. Even though the app can keep track of a user’s GPS location, if a transfer is missed, the user must create a new route as the app does not seem to be able to recalculate routes on the fly. All is not lost as the initial route is still viewable in the app, but if users want notifications and other features rather than just following the general directions, there may be some inconvenience if the route doesn’t go as planned. Otherwise, this is a resounding success story.