When I travel, I often use multiple apps to plan my journey, to check a timetable on the fly, or find out what station I’m at when there are no audible announcements.

The simplest way for me to look up a timetable is with an app called Melbourne PT, developed by Steam Film. At the time of writing, there hasn’t been an update since June 2015. Melbourne PT contains timetable data only, without the complications of maps and journey planners that some other apps use. Once the app is opened, you will see two tabs at the bottom of the screen labeled home and timetables. By default, you are placed on the home screen, which contains a search function. If you know the name of the route number, train station, or bus stop that you will be using, you can enter it here, and select the most relevant option from the search results. This will take you directly to the appropriate timetable you require.

Double tapping the timetables tab will present you with a number of buttons, including metro trains, trams and V/Line, among others.

A few weeks ago, I wanted to plan a journey to visit my family in country Victoria. I clicked metro trains, and was presented with a list of every metro line in Melbourne. After double tapping the name of my line, I was then taken to a list of all of the stations on that line. Tapping my closest station, I could then select trains going to or from the city, and change my date of travel to see timetables for particular days of the week.  Next, there is a list of all the trains going to that particular destination that day. When tapping on a specific time, I can then see all of the stations en route, and the arrival times for each station.

I looked up times for my local train to the city, and the V/Line train I needed to catch.

Once settled on my metro train, I was relieved to find that the automatic announcements were turned on, and seemed to be giving the correct information. Just to be on the safe side, however, I opened my go-to app when travelling by train around the city: Stop Here. 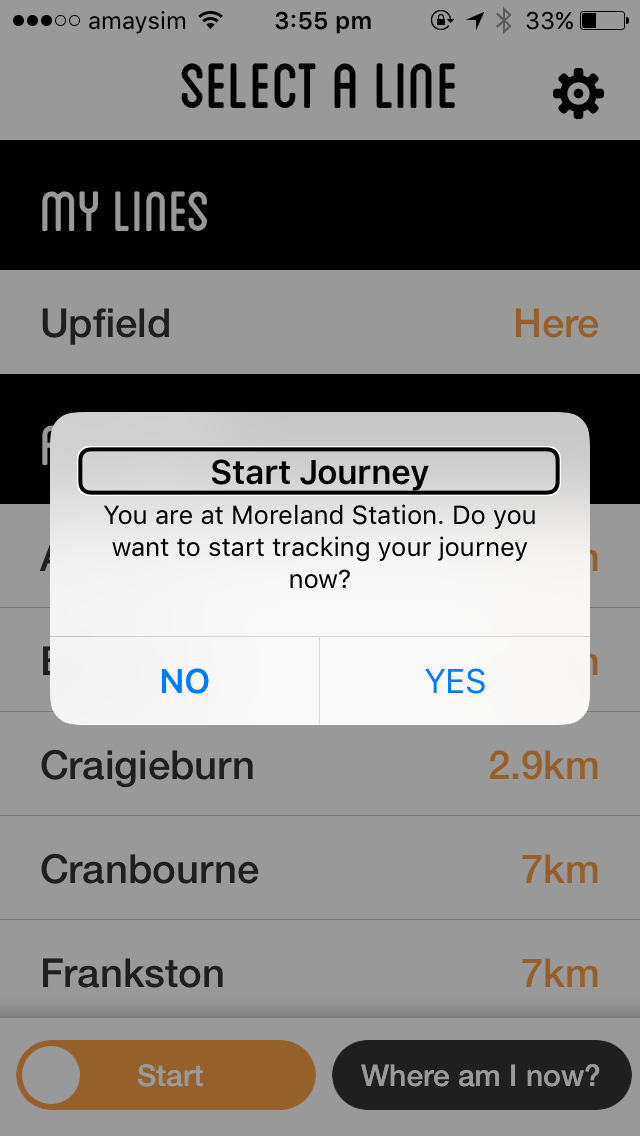 Stop here, developed by Metro Trains, is an app providing information purely relating to train services and timetables. Not only can you look up timetables, but it's like having your own personal train announcer. You can activate an option called Find My Closest Station, and you will receive alerts, even when your screen is locked, which will inform you of what station you are approaching, as well as when you have arrived at that station. You can also add frequently used train lines to a favourites section called My Lines. There is an option to set the app to alert you when approaching every station, or specific stations that you have selected. When using Stop Here you will see that all of the information is displayed as buttons, rather than tabs. It is a simple interface that is extremely accessible with VoiceOver.

When arriving at Southern Cross Station in Melbourne’s CBD, I waited for assistance from station staff to find the correct platform. Southern Cross has a number of inaccessible features, including poor acoustics which can make navigation more challenging. Country trains rarely depart or arrive from the same platforms and guessing games are never fun, especially when you’re deprived of caffeine. In the event that a staff member didn’t turn up, I opened Trip View, an app which will be reviewed in a separate post. I won't talk too much about it here, except to say that I have a couple of travel routes in my favourites so I could easily look up the timetable for the next country train, in case I didn’t make it.

While it may seem inefficient to use a number of apps when travelling, I like to think of it as a travel toolbox. It’s about finding the right app, or combination of apps, that will suit your needs. Having travel apps on hand has made me feel safer on public transport, less anxious about missing stops, and has made journey planning much more efficient.